“Recognizing Competences. ECVision: Comparability and Validation of Supervisory and Coaching Competences” has taken place at Urania/Vienna from the 24th-25th of September 2015.

The conference included the key lecture “Research on Supervision and Coaching Skills Past -Present -Future” by Heidi Möller, Professor at University of Kassel, “The Map isn’t the Landscape”, an introduction to the Competence Framework by Wolfgang Knopf and Michaela Judy, four workshops, an expert’s panel and lots of time for discussion in small groups as well as in the plenary.

See here some impressions from the conference 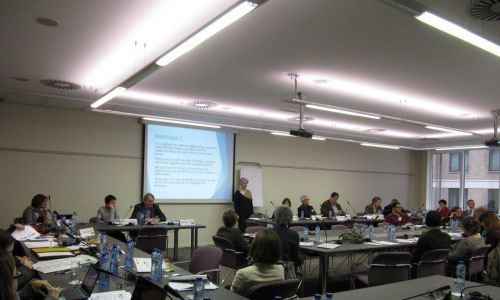 Gleanings of the first ECVision Product, the Glossary for Supervision and Coaching in Europe, was presented at the first Project Conference “Getting involved” in the European Trade Union House, Brussels from Thursday, February 13th to Friday, February 14th. 2014

November 2014: ÖSV commits to depict their standards for training providers in learinig oputcomes according to the ECVision competence framework.

November 2014: ECVision becomes an associate partner of EmployID, a research project aiming at supporting public employment services and their employees in adapting to the changes to their world of work by facilitating the development of their professional identities. Cooperation on competence frameworks is agreed upon.

During 2014: LSVB, ÖVS & DGSv (Dutch, Austrian and German Associations for Supervision and Coaching) take over the ECVision Glossary on their websites.

Article on history of coaching in Hungary in the Hungarian online coaching journal ’Magyar CoachSzemle’. It was the first article written ont he given topic in Hungary, initiated by the Leonardo ECVision project. Therefore, I inviteted professionals to share their professional journeys int he field of coaching and supervision. Several articles of coaches and supervisors appeared in the following issues of the journal, contributing to the professional development of the HUngarian coaching field.

March 2014: Article in the ÖVS-News about the ECVision Glossary